Terence has been a software developer since roughtly the stone age, when computers and modems were large, slow, and noisy. He's always ready to pick up a new set of skills or learn a new technology, and actually reads technical manuals for fun. Suffice it to say, Terence is so unhip it's a wonder his bum doesn't fall off.

An enormous advocate for Sublime Text, Terence spends what might possibly be an unhealthy amount of time helping out users on the Sublime Forum and creating extension packages for it.

He's also been known to play things like video games and guitars, and has an amazing fondness for referring to himself in the third person and making Douglas Adams references.

OverrideAudit is the missing tool for working with and managing your package overrides in Sublime Text 3. From simply helping you remember what you've overridden to warning you of potential problems, OverrideAudit has you covered. 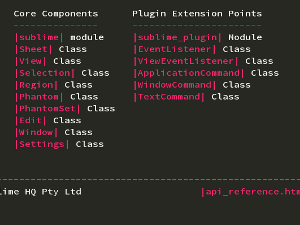 HyperHelp grew out of a project to add a context sensitive interactive help system to OverrideAudit but quickly became its own project.

The main features are a fully hyperlinked and interactive help system similar to that found in other editors like Vim and Emacs. Help files are simple text files rendered by Sublime that allow for linking between pages.

END_OF_DOCUMENT_TOKEN_TO_BE_REPLACED

The main feature here is full access to the Sublime Text API while working on packages, allowing you to easily look up API endpoints and search for what you want without having to leave Sublime Text.

SnAPI is not officially released yet, but I use it daily while working on my own Sublime packages. This video introduction covers how to install it and how to use it.

END_OF_DOCUMENT_TOKEN_TO_BE_REPLACED

This site covers some explorations into game development. This has always been a hobby of mine, which I return to periodically when the mood strikes. This particular iteration is focused on using TypeScript to generate HTML5 games as an easy way to create cross platform content.

END_OF_DOCUMENT_TOKEN_TO_BE_REPLACED

This page was designed by UX designer Xiaoying Riley at 3rd Wave Media and is freely available under the Creative Commons Attribution 3.0 License